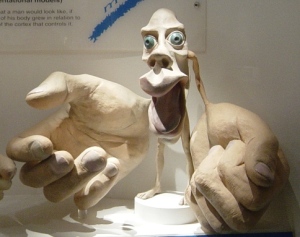 The motor homunculus is a “little man” map that shows how the areas of the brain allocate more control over certain areas of the body, like the hands and mouth.

For example, the homunculus hands are extra-large because a lot of the brain is devoted to the hands.  Our hands are so sensitive and we do all our major feeling of things with our hands.  The lips and tongue are so big because taste and speech take a lot of brain cells.  Areas like elbows and knees are small because they don’t use as much of the brain.  If you put something on your knee with your eyes closed, you wouldn’t be able to tell what object it is.  Your hands would be able to tell though.  The thumb itself is larger than the entire pelvic region.

Certain things can change the structure of your homunculus. If a person experiences a stroke, their homunculus will change shape. It may be lopsided or not have certain parts on it at all.  The brain is dynamic and malleable.  Practicing yoga can be one technique to alter the physical structure of the brain.  Although the number of individual neurons cannot increase, the neuron pathways and connections can become more efficient.  The circuitry of your brain can rapidly form between existing neurons to meet new demands.  This is the basis for muscle awakening in yoga.  As you gain more body awareness through yoga practice, refining the circuitry of your brain becomes a byproduct. When you advance your physical practice, your mind-body consciousness expands.

A neurosurgeon can affect the body by stimulating the brain.  A yoga practitioner can begin at the other end of the nerve pathway by heightening the awareness of the body.  There are some areas of the body that we use so often that the brain doesn’t have to think about the engagement.  For example, your psoas muscle (deep hip flexor and core muscle) is engaged so often that it is unconscious and is very small on the homunculus.  To strengthen that mind-body connection, yoga practioners can start with awareness.  Be aware of what the psoas (or any other region of the body) is feeling during asana practice—is the psoas tight, tense, or open?   Then the next level of consciousness is learning to engage or release the psoas, which can be enormously helpful in yoga practice.  Next time you get on your yoga mat, think about how your homunculus is changing and evolving.

Christy and her favorite, triangle pose.

Lovely Christy has been a part of our yoga community since Western Springs studio opened in 2012. She went through our YBD Sculpt Teacher Training and has been a bundle of energy in the sculpt classroom ever since. Encouraging “Woo!” sounds often come from her classroom and her shining smile at the front desk is the star of the show. We are so grateful to have this naturally talented teacher as an integral part of the team and look forward to her next chapter at YBD. Take a peek at her answers below to get to know Christy better.
Come take her sculpt class in Western Springs on Sunday mornings at 8:30 or 10am, Thursday nights at 6pm, or in Elmhurst on Saturdays at 9am.
When and how did you come to yoga?
I took my first yoga class in November 2012 at Yoga by Degrees.  When my collegiate volleyball career came to an end upon graduation, I found myself searching for new ways to stay active.  Yoga by Degrees in Western Springs was a new studio that was opening, so I built up the courage to try a class.  I immediately knew yoga would be a part of my life after taking my first class.  I fell in love with the balance of strength, grace, and active calmness that yoga offers.
Why did you start teaching yoga?
Once my personal yoga journey began, it was not long before I decided that I wanted to share the positive benefits of the practice that I experienced with other practitioners.  I knew the opportunity to teach yoga would allow me to reach out to others in the yoga community and hopefully make an impact on the wellness and minds of others.  I became certified to teach Yoga Sculpt in the summer of 2013, and teaching has been such a wonderful part of my life since then.
What is your favorite pose?
My favorite pose is Trikonasana (Triangle Pose).  I love this dynamic pose because it is such a beautiful combination of strength and elegance.
Who inspires your teaching?
Every person and situation that I encounter inspires my teaching.  I believe in constantly learning from others, and I use these reflections to inspire and shape my teaching.  I feel truly grateful for the teachers and students I have the opportunity to work with at Yoga by Degrees.  Not only am I inspired by the physical aspects of their yoga practices, but also by the strong sense of kindness and consciousness that is present in the yoga community.
Tips for beginners…
I encourage beginner yogis to be aware of the physical and mental aspects of their yoga practice.  Many access yoga on the physically active or workout level, but I think it is also important to be cognizant of the fact that yoga is so much more than this.  Of course the physical health benefits of practicing yoga postures are great, but the yoga journey has the potential to continue to a much deeper level of mind and spirit.  I also encourage beginners to have an open mind and have fun!  It is easy to be very hard on ourselves, especially when trying something for the first time.  While it teaches us to be patient, yoga also requires patience.  Be kind to yourself, and have gratitude for the ability to keep trying and improving your practice and wellness.
What’s your favorite quote?
“The peace you seek is always there.  It sits quietly and calmly beneath everything else.  Let go, and feel it now.” -Ralph Marston